Last Thursday, Los Angeles Police Department and LA City Attorney continued their crackdown on the illegal nightclubs and casinos in the city. This time, the targets were three illegal businesses in the Hollywood area.

Mike Feuer, the Los Angeles City Attorney, held a press conference on Friday explaining the details of the latest actions of the local law enforcement. As he said, his office has filed 17 criminal charges against three illegal Hollywood businesses. These three establishments were the subject of the recent LAPD raid. The police acted on a warrant which resulted in arrests of the individuals who allegedly ran illegal operations inside those establishments.

Guns Found at the Illegal Nightclub

Two of those businesses were illegal nightclubs where the banned narcotics were readily available. The third is supposed underground casino. One of the nightclubs was located at 00 El Centro Avenue. It’s a residential area and the Larchmont Charter School is close by. Feuer stated that no residents of Los Angeles should be forced to put up with what was going on at these establishments. Allegedly, during the raid, the police officers discovered multiple guns at this illegal business. Officials added that a shooting took place at this exact location a month ago. LAPD Captain Yasir Gillani explained that the police became aware of this illegal operation thanks to the crime stoppers’ tip. Now, the owners of this unlawful establishment face 12 criminal charges.

The underground casino was discovered at 5547 Santa Monica Boulevard after the police executed a search warrant based on an anonymous tip. Allegedly, a man who was robbed and beaten at the casino tipped off the LAPD. The illegal gambling operation took place on the second floor of a swap meet adjacent to the Hollywood Forever Cemetery. Initially, the LAPD planted an undercover agent to observe the illegal gambling operation. In addition to observing unlawful gambling activities, the undercover officer was also able to purchase methamphetamine at the establishment. While conducting the raid, the police found unlicensed gambling machines, ammunition, and large quantities of cannabis at the site.

The signage on the building claimed that it was Young’s Market, a quick-stop shop with ATM, EBT, and offering money order services and lottery tickets. According to law enforcement, the person arrested on the scene admitted to having used the rented space to operate an unlicensed casino. Brandon Chang, unknown age and residence, is now charged with one count of illegal use of land and/or property. In case he gets convicted, Chang is looking at $1,000 fines and up to 6 months of prison time. While at the scene, police also arrested several other people on outstanding warrants.

LAPD will continue the investigation and continue to revisit and monitor these locations to prevent any future criminal activities. The latest raid is the latest in a series of recent busts of the alleged illegal casinos. During the summer, police arrested 24 individuals for alleged involvement in the unlawful gambling network. The operation was run at several locations masked as local convenience stores. LAPD has encouraged citizens to report any information they may have on illegal gambling activities. 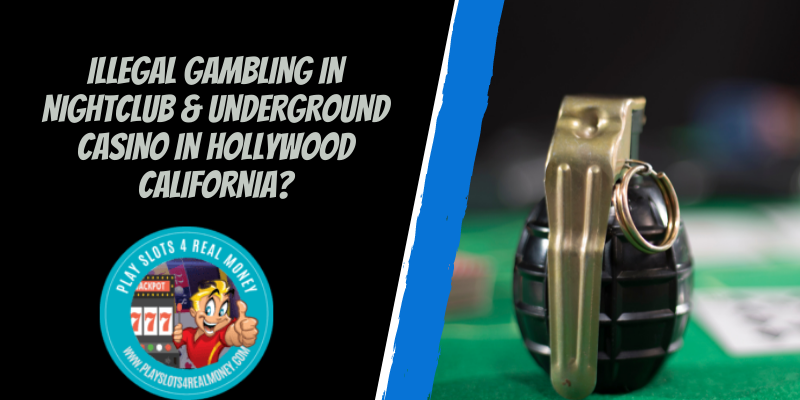 Article Name
Illegal Gambling In Nightclub & Underground Casino In Hollywood California?
Description
Find out why the illegal gambling in nightclub and underground casino is a topic that has been much discussed by Los Angeles residents for years.
Author
Rich Caesar
Publisher Name
PlaySlots4RealMoney.com
Publisher Logo