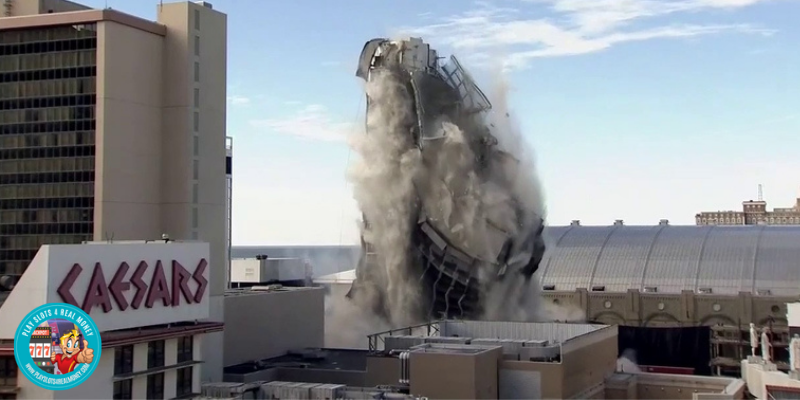 One of Atlantic City’s biggest eyesores for the past several years has been the former Trump Plaza casino. The building was closed for good in 2014. As of Wednesday, Feb. 17, it is finally gone for good.

Donald Trump’s run in the New Jersey casino business overall was far less successful than he envisioned. Most of his development projects ended up in bankruptcy such as the Trump Plaza. That particular casino once marketed itself as “the center of its all.” Yet, it was left to rot over the past several years. This was while it occupied a prime location on Atlantic City’s iconic Boardwalk.

The build was bought out of bankruptcy by another billionaire developer Carl Icahn in 2016. He actually bought the two remaining Atlantic City casinos that had been shuttered through Trump’s financial downfall.

Pressure began to build over the fate of the Plaza as the property fell into further disrepair in recent years. Icahn finally agreed to raze the building early this year.

Atlantic City Mayor Marty Small proposed a fundraiser to aid the local Boys and Girls Club of Atlantic City. The winning bid would get to push the button to implode the building. Citing safety concerns and liability issues, Icahn matched the top bid of $175,000.

Atlantic City decided to hold a fundraiser around the Trump Plaza implosion for the club. The net proceeds from that effort reached $16,000.

Trump Plaza first opened in 1984. At one time, this became the most profitable casino in this South Jersey coastal gambling town. Along with ongoing casino action, the property hosted a number of bigtime events. Mike Tyson fought at the Plaza and the Rolling Stones played a concert near there.

More recently, the Plaza was the backdrop for a scene in the popular movie Ocean’s Eleven. Bernie Mac played a card dealer at the casino. He was recruited for a casino heist in Las Vegas by George Clooney and Brad Pitt.

The turning point in the Plaza’s success was actually another Trump casino. He opened the Taj Mahal in 1990. As Trump’s economic fortunes soured under crushing dept, resources earmarked for the Plaza were funneled to the Taj Mahal.

Investment in both the Plaza and Trump’s Castle continued to decline. High rollers were shipped over to the Taj Mahal in an effort to bolster that property’s bottom line. The net result was the beginning of the end for Trump in AC.

One by one, each of these casinos failed and ended up going bankrupt. The only building that remains is the Taj Mahal. That property was also bought by Icahn. It was later renovated and reopened in 2020 as Hard Rock Atlantic City.

By 2014, the Plaza went from first to dead last among the 14 casino properties in town. The new leader in Atlantic City was Borgata. This is still the highest-grossing casino in gaming revenue today.

Short-term plans for the old Plaza property include public parking. Long-term development plans are in the works.

Nome do artigo
O antigo Trump Plaza de Atlantic City é finalmente implantado
Descrição
One of Atlantic City’s biggest eyesores for the past several years has been the former Trump Plaza casino. The building was closed for good in 2014. As of Wednesday, Feb. 17, it is finally gone for good.
Autor
Penny Cleopatra
Nome do editor
EasyMobileCasino.com
Logotipo da editora